It is up to Governor Cuomo to decide if New York State will start drilling for natural gas using fracking. Officially known as hydraulic fracturing this is method takes more natural gas out of shale formations deep underground. There are a few ways to take take shale gas but this one is the most profitable.

Let me show a simplified graphic that shows what fracking basically does. 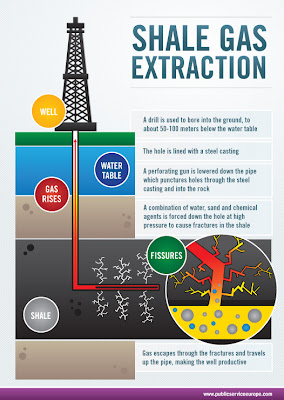 A hole is drilled into the ground and small explosives are used to get through the ancient shalebed of limestone that traps oil and gas. Most of the east coast of America has this formation underneath with 1-11% of gas-potential in New York State. Once the hole is made a casing, that should last for 50+ years, is made of layered cement that will act as a pipe. A mixture of water, over 750 chemicals, and an aggregate like sand is forced down the hole. This cracks the shale and releases the gas. Extensions to the original holes are made to control the pressure. When negative pressure is achieved a certain percentage of gas and fracking fluid is pushed through the pipe to the surface.

Whew and that is the simple explanation.

Here is the complex explanation and a list of what is left out: 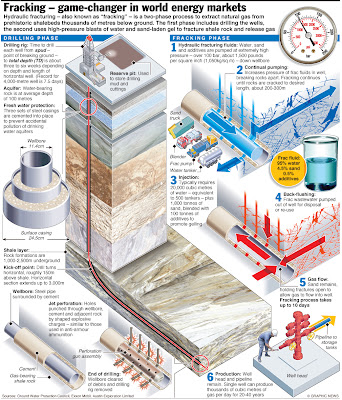 NYPIRG has been the most vocal group in New York since the watershed in the area is purest and cleanest in America and it reaches millions of people. This summer they have been warning residents of the possible dangers as well as soliciting memberships. Other environmental groups have been heavy handed and exaggerating claims but NYPIRG does seem to want New Yorkers to remain safe especially if gas prices wil not drop.

Engineering groups, gas companies, and tech businesses have been for fracking since failure rate is low and in New York more monitors will be used. Also the potential of jobs and lower gas bill, even if temporary is a great thing.

The New Yorkers have really been split. Many people are against the chemicals being used and the lack of waste water treatment plans. Still some just need a financial break and have confidence that if breaks do occur they will be dealt with in a timely manner. Of course 99% of the people do not want a gas well near them which speaks volumes.

Governor Cuomo of Mt. Kisco has remained silent on this issue and his past record has shown close ties to the gas oil industry. I expect despite NYPIRG's efforts that he will not decide anything until mid-2014. Personally I am against fracking but not drilling. I know there are alternatives to hydraulic fracturing and forcing the gas industry to use it will help all New Yorkers. I would enjoy working for the gas company if this can done safely, yes I have applied for them in the past as well as for the groups opposing them. Science should halp both sides come to a rational solution.

Email ThisBlogThis!Share to TwitterShare to FacebookShare to Pinterest
Labels: Space

Recent NYC weather has us approaching records rainfall, which I enjoy.

Plus it gave me a chance to take video of lightning and other weather phenomena. 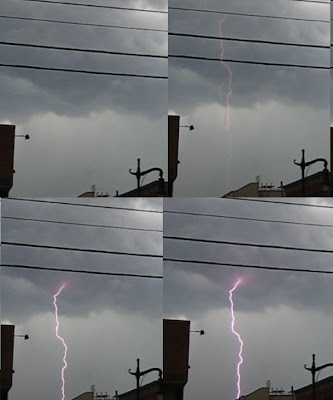 A great series of a lighting strike. Series goes from cloud lightning forming with a leader and secondary higher path, the initial strike, the height of brilliance. 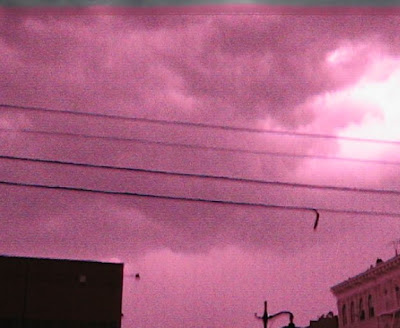 After the strike in less then a second my camera turned purple. I assume this was from the electrical discharge. 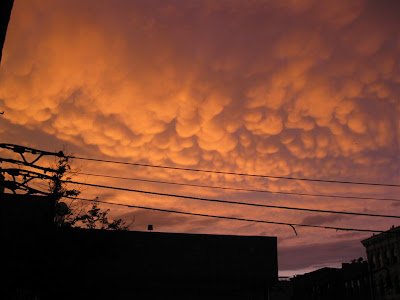 Then after the mini-storm a small group of mammatus clouds appeared at sunset. 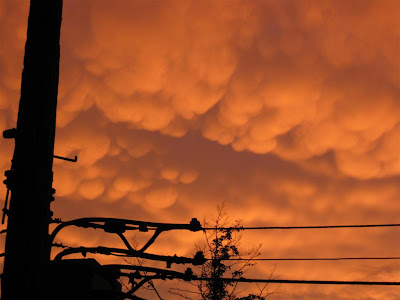 They looked otherworldly.
Mammatus clouds are cumulus clouds characterized by the pouch-shaped formations hanging underneath. These clouds are associated with strong storms and can only exist when cumulonimbus clouds are also around.
Posted by That Other Man at 12:41 PM 1 comment:

Email ThisBlogThis!Share to TwitterShare to FacebookShare to Pinterest
Labels: Weather

Luckily with the constant summer showers I was able to catch several rainbows. The one pictured below was the best of the bunch. It was just a simple rainbow no secondary arc. 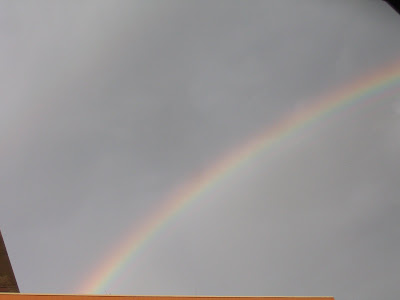 Straight from the fire escape at the end of the mini-storm. I learned the easiest way to find a rainbow is while it's raining wait for sun to come out and then turn your back to the sun. 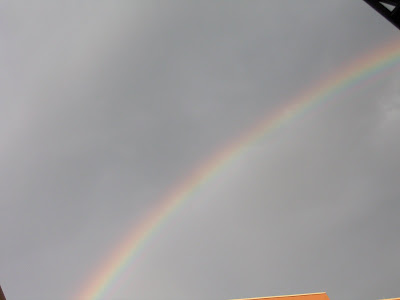 Sure the technical way to locate a rainbow is look for a multicolored arc at a 42° radius, with an option of a secondary inverse rainbow at 51° radius. The problem is that most people can't judge these exact degrees. Also trying to capture a secondary bow with a lower end digital camera is tough.

As long as you have small water drops then the light entering it can refract and separate into the seven colors we see.
Posted by That Other Man at 11:42 PM No comments:

Email ThisBlogThis!Share to TwitterShare to FacebookShare to Pinterest
Labels: Weather

Science In The Sky

Besides the boring engineering stuff I have to do for college and the Excel sheets and all the MATLAB code I try and take scientific photos.

I got the book National Audubon Society Field Guide to North American Weather and they have over 350 beautifully colored pages of different weather phenomena. My plan is to duplicate each photo subject through my window.

First up is the Optical Phenomena. Can you guess what is pictured? A closer view may help. Finally a broad shot.
The first two pictures were of sun dogs and the last also has a halo.

Sun dogs are known more formally as parhelia they often appear in pairs but in this case only one was visible. They can be solid white light or as seen more of a rainbow effect with the red closer to the sun and blue away from the sun. They are found to the right or left of the sun on the same plane and seen at a 22-24 degree distance.

This one had an accompanying parhelic circle or halo. Haloes are formed when light gets refracted through ice crystals in cirriform clouds. The ice crystals must be hexagonal with two flat ends.

Now this phenomina can occur all over the country and at any time of year but is most common in the southwest and before and after storms.

Today's Links: http://www.atoptics.co.uk/
Posted by That Other Man at 10:40 PM No comments:

Engineering is a tough subject.
Posted by That Other Man at 9:46 PM No comments:

Email ThisBlogThis!Share to TwitterShare to FacebookShare to Pinterest
Labels: Engineering

Dynamics: Deals with objects moving with an accelerated motion.
It's concerned with the equilibrium of these objects.

Rectilinear motion of particles.
A particle is in rectilinear if it is moving along a straight line.
*Position: Xp: position coordinate of the particle
: algebraic scalar
rp: position vector
*Displacement:
Posted by That Other Man at 9:06 PM No comments: